Writing as re-writing, as copying, as echo.  Pause, hesitation, stutter.

Trying my hand(s) at the typewriter for the first time in probably two or three decades, I realise how much manual strength is required to type the words.  My left little finger is barely strong enough to type an ‘a’, it’s so used to the slender, sensitive keyboard of a MacBook Air now.  I had to start using both index fingers to type the more difficult letters when I needed them.  On the typewriter I was using, there was no ‘carriage return’ key – so I had to manually adjust the paper position when I wanted to start a new line.  I didn’t always get the spacing right.  Typing on the typewriter slowed me down in so many ways: I didn’t always hit the space bar hard enough; I carelessly typed letters in a jumbled order that couldn’t be fixed by autocorrect.  I had to keep starting again every time I made a mistake.

This echoing of the writing practices of Theresa Hak Kyung Cha, copying out a piece of her writing using the technology that she used, gave me a sense that the typewriter is a medium that embodies the gestures of pause, hesitation and stutter.  Gestures of aphasia within speech that Cha explores throughout Dictee. 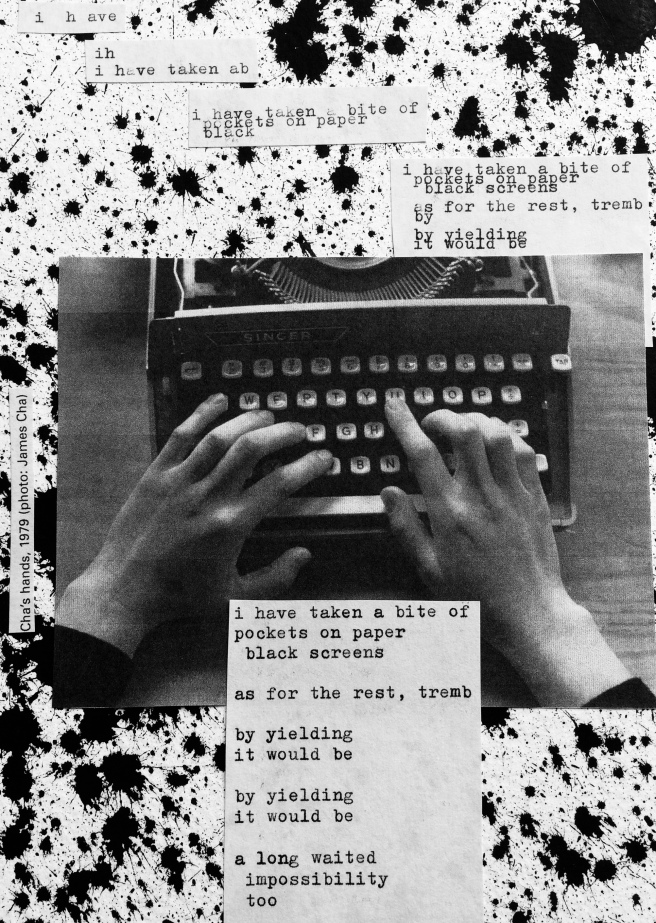 i have taken a bite of this root

pockets on paper openings on paper

One thought on “Echoes of Theresa Hak Kyung Cha”