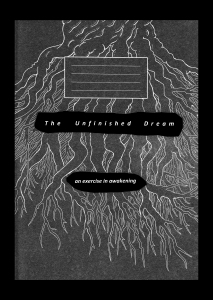 The Unfinished Dream is an experimental writing collection, an artist book, a short film and a performance.  It began as an experiment in applying Ernst Bloch’s utopian theory to creative writing practice, inspired by the text works of Theresa Hak Kyung Cha.  Both Bloch and Cha explore the relationship between subject and object (self and other).  Bloch suggests that the experience of non-alienation, where the subject (the individual) experiences itself as not-separate from the object (the world/the other) is the essence of the utopian.  Cha embodied this desire to create an experience of non-alienation between the subject and the object in all of her major text, film, and performance works.  The Unfinished Dream experiments with these ideas and has developed into a collaborative project that keeps growing and shifting – an unfinished and unfolding creative process.

All elements of the project take as a starting point the following quotation from Cha’s 1982 book Dictee: ‘May I write words more naked than flesh, stronger than bone, more resilient than sinew, sensitive than nerve’.

Chapbook copies of The Unfinished Dream are now available from Sad Press. 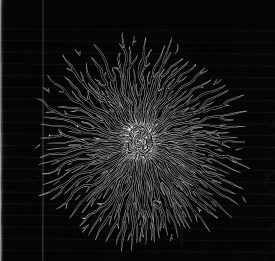 The physical object of the book is a central concern of The Unfinished Dream.  The experimental writing collection explores the ways that the materiality of the book is often ignored and made invisible at the expense of the words and ideas it contains, in a similar way perhaps to the relationship between the physical human body and the concepts and ideas that are generated by the mind.  The Unfinished Dream explores writing, drawing and creative practice as embodied, physical processes – processes that take place in, of and through the body, and which may be experienced physically, viscerally and emotionally by those who come into contact with them.

Similarly, the general invisibility of the book form means that culturally we take for granted the codex structure which has become synonymous with what a ‘book’ is.  Historically though, and across geographical and cultural spaces, different forms such as scrolls, wrapped papers, and now digital platforms have provided alternative ‘book’ forms with different relationships to structure, linearity and temporality.  The codex form developed with Coptic Christianity and encodes the linear, teleological (end-focused) structure of the biblical narrative.  What happens when we question these invisible assumptions that structure the stories we tell ourselves, and the stories we tell of ourselves, so implicitly?  The Unfinished Dream explores the human relationship to the codex form and the teleological narrative it encodes and embodies.

When making The Unfinished Dream we also wanted to question some of the invisible assumptions which suggest that artist books must be artisan products, requiring specialist skills, materials and equipment to produce and displaying the skills of fine craftsmanship.  We love those kinds of artist books of course.  But we were interested in a kind of democratic creative process that didn’t fetishize the book as an object, that embraced real life physical processes and that aesthetically embodied the ideas contained within the book.

The  co-creative relationship between the reader and the writer/artist is at the heart of The Unfinished Dream, as the reader must complete and interpret the work of the writer and illustrator from the multiple possibilities that are offered both within and beyond the text.

A copy of the Artist Book is held in the collection of the Liberature Reading Room in Krakow, Poland. 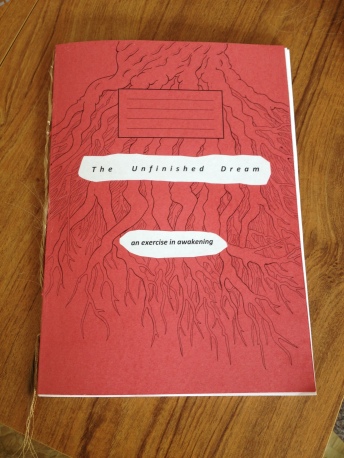 We created the initial version of the film in roughly 24 hours.  The film consists of layered images including a looping animated sequence, and the layered distorted sounds of spoken-word poetry.  It’s designed to loop continuously, which aims both to disrupt the teleology of linear narrative structure and to create a mesmeric and meditative experience for the viewer.

The Unfinished Dream was first performed at Phoenix Brighton on 15th May 2016 as part of the Press & Release / Connect & Collect artist book event for the 2016 Brighton Festival.  Like the book and the film, the performance is designed to disrupt the boundaries between subject and object, self and other, artist and audience.  As a performer – naked and projected onto like a blank screen, canvas, or the page of a book to be written upon – Sally-Shakti Willow enters into the space of the art object, with the viewer as the projecting/interpreting subject, and yet she retains the position of artist-subject in relation to the work she performs.  In this space, the boundaries between self and other, subject and object, become blurred and uncertain.  The performance becomes an open space between artist and audience in which the work itself is co-created as an experience between all those present.  The effect is heightened by the looping projection of the film throughout the performance.

Theresa Hak Kyung Cha, in her 1975 performance A Ble Wail wanted to be ‘the dream of the audience’: this performance of The Unfinished Dream attempts to explore what that might mean.

Some of the initial responses from spectators of the performance at Phoenix Brighton.

3 thoughts on “The Unfinished Dream”