[some initial thoughts on reading Berg, by Ann Quin]
Berg by Ann Quin [1964] : Dalkey Archive Press, 2013
Like rolling waves that crash and suck against a pebbled shore, Berg’s narrative streams in and out of consciousness: a world creating and uncreating itself in rhythmic tides.

‘The partition swayed : a boat without sails, anchored to a rock, yet revolving outside its own circumference.  I an albatross, never to fly in a direction taken a million times before.  Berg looked at the crack in the ceiling.  Follow on the dream, the beginning conjured up in a single second, an isolated thought hooked out of the mainstream of chance.’  p22

I loved Quin’s experimental narrative style – an interior:exterior voice narrates the story of Aly Berg who comes to a seaside town to murder his father.  It’s a dark farce of raw British family tensions.

‘Alistair Berg, alias Greb, commercial traveller, seller of wigs, hair-tonic, paranoiac paramour, do you plead guilty?  Yes.  Guilty of all things the human condition brings; guilty of being too committed; guilty of defending myself; of defrauding others; guilty of love; loving too much, or not enough; guilty of parochial actions, of universal wish-fulfilments; of conscious martyrdom; of unconscious masochism.  Idle hours, fingers that meddle.  Alistair Charles Humphrey Greb, alias Berg, you are condemned to life imprisonment until such time you may prove yourself worthy of death.’  p56

I loved the seedy sixties seaside setting: an un-named but recognisable Brighton.  Back in 2014, we’d been to see the Berg installation at Brighton University – it was realised with incredible detail and an uncanny atmosphere.  Reading the book, I was back there again, fully immersed in the setting that had been created from Quin’s words and vision. 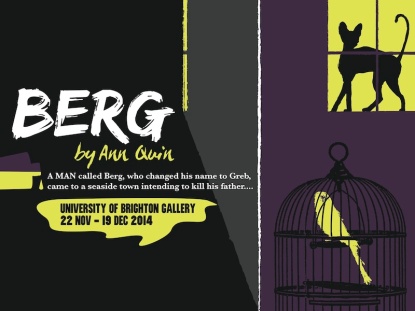 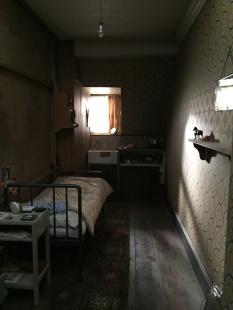 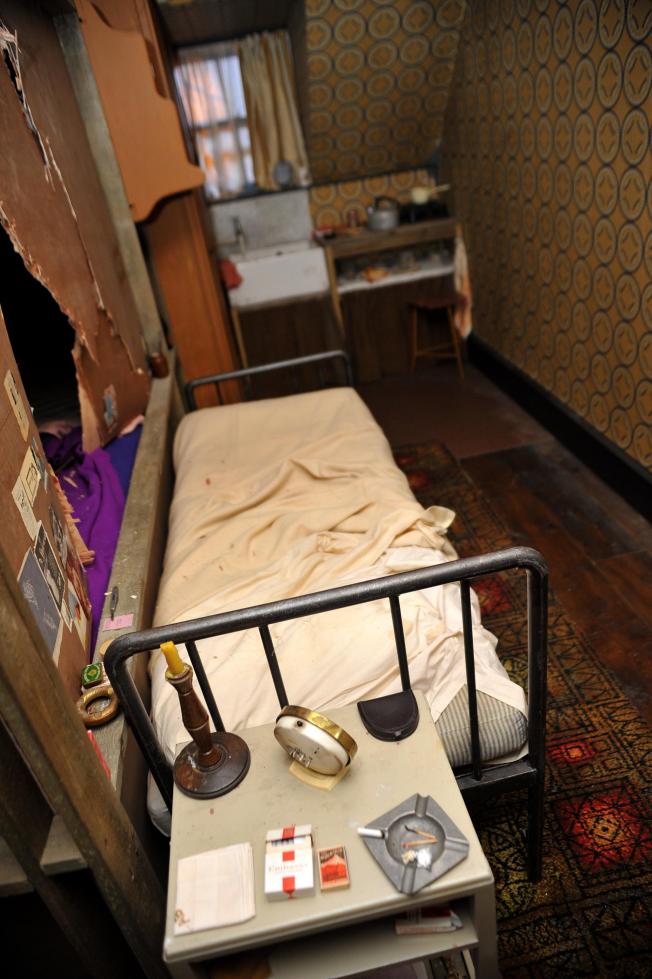 I loved never quite knowing whose head we were in; what might be real, remembered or imagined. To me, it experiments with the idea of co-creative consciousness – who says that the world outside is more real than the ones we create inside ourselves?

‘You castle-bound, spying on princesses, honey-gold, singing against the blue, if touched surely their skin would ooze?  Aware of own smell, skin-texture, sun in eyes, lips, toes, the softness underneath, in between, wondering what miracle made you, the sky, the sea.  Conscious of sound, gulls hovering, crying, or silent at rarer intervals, their swift turns before being swallowed by the waves.  Then no sound, all suddenly would be soundless, treading softly, dividing rocks with fins, and sword-fish fingers plucking away clothes, that were left with your anatomy, huddled like ruffled birds waiting.  A chrysalis heart formed on the water’s surface, away from the hard-polished pebbles, sand-blowing and elongated shadows.  Away, faster than air itself, dragon-whirled.  Be given to, the sliding of water to forget, be forgotten; premature thoughts – predetermined action.  In a moment fixed between one wave and the next, the outline of what might be ahead.’  p152

In my utopian reality, it’s a constantly imaginative interplay of co-creative consciousnesses interacting internally and externally with one another and the world, like an ever-changing tidal flow.